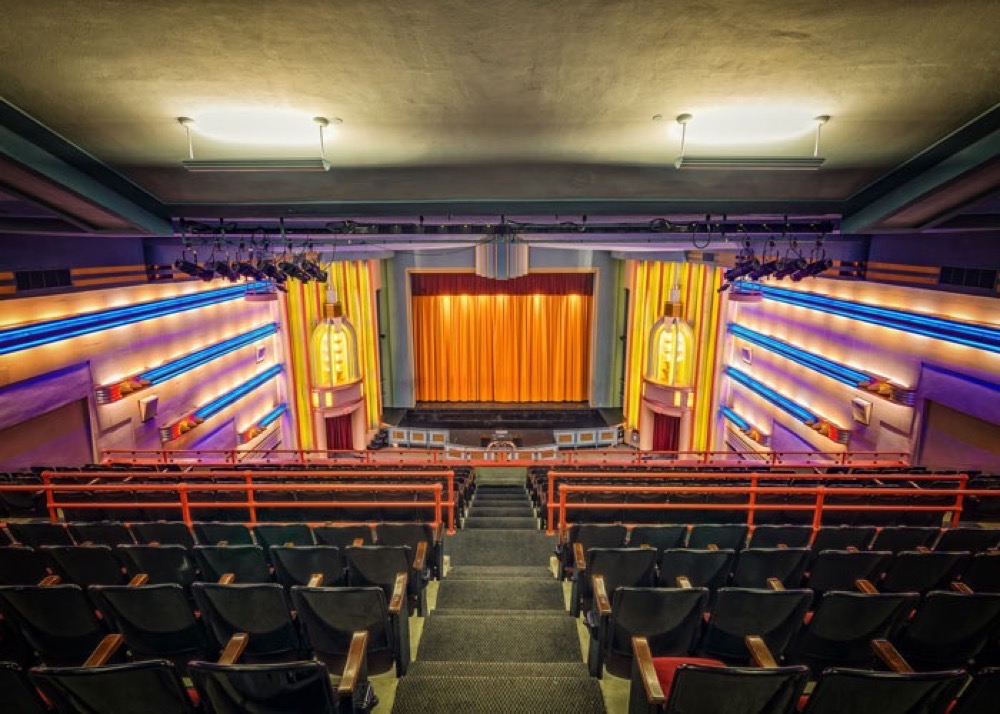 Popular movies such as “The General” starring Buster Keaton and “The Great Gatsby” with Warner Baxter were captivating audiences in theaters across the world. And in the rapidly growing city of Fargo, North Dakota, a brand new art-deco-style cinema and vaudeville theater opened its doors.

Today, many recognize the iconic marquee of the Fargo Theatre. It, like many other small-town theater marquees, is a prominent centerpiece of a bustling downtown, an emblem of the glamorous age of early Hollywood. However, while other small town theaters have been repurposed or fallen to disrepair, the Fargo Theatre still looks very much like it did nearly a century ago, and it still serves as a showplace for live entertainment and, of course, movies.

“I think movies are one of the most powerful and influential art forms that we have in modern society,” says Emily Beck, executive director of the Fargo Theatre and self-proclaimed movie nerd. “Whether you’re escaping into a whole new world, an artist’s vision or a character that draws you in, you can be in the dark for two hours and lose all sense of anything around you.”

Architect David Crutchfield, who served as a design consultant for restoring the Fargo Theatre and the building of the more recent second theater, agrees.

“Movies are magic,” he says. “When those lights go down and the projector goes on, that carries us beyond the screen and into a world where we’re willing to suspend our realities. And movie theaters prepare us for that.”

Crutchfield describes movie theaters as being a type of portal, an architectural experience that gives you a sense of wonder before stepping into the movie’s world. The Fargo Theatre itself is a prime example of movie theater magic, he says.

Inside, the blues and pinks harken back to that early 1900’s art-deco style, complete with curving lights called “light fountains” and a thick red curtain that hides the screen. There is even an original 1926 Wurlitzer organ that is still in working order.

Yet, even with all the old charm and movie magic, recent years have proven to be a struggle for some small-town theaters. Larger movie theaters draw more crowds and have more screens to host a variety of movies.

This was one of the challenges Margie Bailly faced while she was director of the Fargo Theatre from 1996-2011—namely, that if she wanted to show a film at the Fargo Theatre, distributors require that it be shown every night and on weekends. This was a problem because the Fargo Theatre hosts live events that would disrupt that schedule, yet provide necessary income for the theater.

“Whether you’re escaping into a whole new world, an artist’s vision or a character that draws you in, you can be in the dark for two hours and lose all sense of anything around you.”

In addition, the Fargo Film Festival was growing every year. The team was running out of creative space to host film viewings—already they had utilized a cowboy bar and an embalming studio for some of the events.

“At that point in time, we wanted an additional space,” Bailly says. “That was always a dream I had in my head.”

The initial designs for a second theater were created in 1995. But the plans wouldn’t come to fruition for another ten years when Margie brought the plan to Kilbourne Group as a proposal for a vacant 300 Broadway lot.

“We needed this space,” Margie said. “This is exactly the right place and space.”

Kilbourne agreed, and construction began at 300 Broadway – once an old parking lot and now the canvas for a mixed-use infill project that included the theater. From the beginning, the interior design of the second theater was the focus of many conversations.

“We wanted to bring the DNA from the big theater into this space,” Margie said.

Some suggested a more modern take. There was talk about making it a black box with black walls and black curtains to bring more attention to the film. Others thought the theater should have recliner chairs like the bigger theaters were adopting. But Bailly and David Crutchfield, the design advisor, fought to maintain similar features to the larger 1926-era theater. Many of the details are ones the audience may never notice, Crutchfield says. The carpet design, for instance, was carefully chosen to replicate that of the original theater, as well as the red and wooden chairs. Other similarities include the curvature of the ceiling, the red curtains and the reclaimed wood used for the stage.

“It was all part of trying to provide an homage to the old theater while looking boldly ahead into the future,” Crutchfield says, “which, we thought, poetically represented Fargo in many ways.”

The second theater, called Fargo Theatre Off Broadway, opened its doors in 2009 and has since been the host to a variety of events. It seats nearly 80 and is used for film showings, as well as private events.

“We host everything from children’s birthday parties to corporate events,” Beck says. “The smaller space makes it a great place for panel discussions, too.” The addition of the theater has allowed the Fargo Theatre as a whole to reach a new level of growth, she says. This year, they were able to show the films “Lion” and “Moonlight” during Oscar season, for instance, due to the freedom of a second screen to keep showings consistent.

“It was all part of trying to provide an homage to the old theater while looking boldly ahead into the future,” Crutchfield says, “which, we thought, poetically represented Fargo in many ways.”

“Theater two has been a gift to our organization,” Beck says.

The gift is not just the ability to host more events, either. The addition of the second theater, as well as the donations and patrons that keep the Fargo Theatre alive, show Beck that this theater is loved.

“I’m grateful to live in a community that values preservation of historic facilities,” she says. “That this place remains and is supported so generously, we’re lucky to have people like that in this community. We know that here.”