While we at Fargo INC! love to celebrate the people making the Fargo-Moorhead community a great place to work and start a business, the fact is that we can’t keep ’em all.

Dan Ficek is a 2007 graduate of Fargo North High School and, for the last four and a half years, has been working in Seattle as an engineer for Boeing, the world’s largest aircraft manufacturer. We recently caught up with the Fargo native to get a glimpse into what a typical day designing airplanes is like and to see what he likes most about life in the Pacific Northwest. When did you first know you wanted to work with airplanes in some capacity?
DF: Well, let me start by saying that I’ve been a space geek since preschool. I loved learning about the solar system and planets and trying to wrap my head around how we are such a small part of something so big. When I got to college and was trying to figure out which field of engineering I wanted to study, I took a survey course that gave some different examples of the types of problems each field faces. The aerospace engineering problem was related to the space shuttle, and at that point, I was sold.

The point at which I turned more toward airplanes was at the end of my junior year of college. At that point in the aerospace program at (the University of) Michigan, you have to make a specialization choice between spacecraft and aircraft design. I had started to get a little burned out on all of the mathematical theory involved in the space side of things, and the aircraft side of things offered a more hands-on experience. So that’s why I went that route.

As you alluded to, you did your undergraduate and graduate studies at the University of Michigan. Why’d you choose that school?
DF: Michigan had everything I wanted in a college experience. It offered top-ten engineering degrees in every field, but unlike most top engineering schools, Michigan also has a great social scene. The sports teams are all fun to watch, and even though most everyone there is smart and hard-working, they’re not so interested in studying that they never want to have fun.

It’s far enough away from Fargo that it offered a sense of real independence, but since it’s still part of the Midwest, there wasn’t a huge culture shock present in making the transition to living there.

Coming from such a prestigious engineering school, we’d imagine you had your pick of the litter, so to speak, when it came to job offers. Why’d you settle on Boeing?
DF: I ended up at Boeing for a few reasons. The biggest factor was that I landed an internship there between my undergraduate and graduate years with a great group of guys from a leadership program I was in at Michigan. Having a summer’s worth of experience at the company under my belt made the transition a lot easier.

I did have a couple other options in the aerospace industry coming out of college. I interviewed at Rolls Royce and Raytheon, both of which would have worked out great as well. But Boeing is the biggest of the aerospace companies, so while Rolls Royce specializes in engines and Raytheon specializes in defense systems, Boeing is big enough that there are just so many more opportunities here. For example, we build commercial aircraft in Washington, fighter jets in Missouri, helicopters in Arizona and satellites in California. There really isn’t another company that offers that kind of diversity in the aerospace industry. Give us a look into a typical day for you.
DF: To understand what I do on a daily basis, I first have to explain what my group does. We’re responsible for all of the instrumentation and data systems on flight-test airplanes. In other words, we put sensors all over the place on the aircraft so that, when it’s flying around, the pilots and crew can understand its performance and health. You know when you see sick people in a hospital and they have all of those wires and stuff hooked up to their body and they’re surrounded by beeping monitors? That’s what we do to the aircraft.

In the simplest case, we’ll design the installation of a temperature sensor onto a part. The challenging part of this is that someone else in the company (or often times, a supplier) owns this part. So in order to come up with a way to stick this sensor there, we have to negotiate all of the installation details with them and get their approval. What kind of bonding material are we going to use? Where is the wire going to go and how will we support it? How do we verify that we’re reading the right temperature here when we have 1,000 other temperature probes on the airplane going into the same data-acquisition equipment? So as you can see, it starts to get complicated really fast. And this is the simplest example of what we do.

As a lead in the group, my job is a little less detail-oriented and more strategic.

Now, instead of figuring out these questions for a very specific job like one temperature probe, I have to figure out and set up the process for all of the instrumentation. Now the questions I deal with and have to address are more of this nature: how do we figure out which groups and specific people are going to have to approve our engineering? What’s the total number of sensors we can install on this aircraft? How many engineers and installation designs do we need to accomplish this work?

Ficek’s Typical Day
7:30-9 a.m. Through email, I start the day answering a few questions that some of the roughly 20 designers on my team have.
9-10 a.m. My first meeting of the day is with representatives from different parts of Boeing to review my designers design concepts and to provide feedback.
10-11 a.m. I attend a general coordination meeting with one of our suppliers, Spirit Aerosystems, which is based in Kansas.
11:30 a.m.-12:30 p.m. I attend a team meeting where designers give a quick status of their jobs and let me know if they need any help or are stuck and can’t move forward with their designs.
1-2 p.m. I attend another general coordination meeting, this time with an Ohio-based team from General Electric, the owners of the 777-9 engine design.
2-4 p.m. I review a couple of installation designs that are nearing release and either sign off my approval or provide feedback that needs to be addressed before I will sign. Dan Ficek sitting in the cockpit of one of the Boeing planes he helps engineer.

What do you enjoy most about your job?
DF: I love the fact that the product I produce is tangible and very easy to see. On any given day, I can walk across the street to the Boeing Field tarmac and go check out the different flight-test aircraft. The other day, I was able to walk up to one of the new US Air Force KC-46A Tanker aircraft and see one of the sensors for which I designed the installation.

Is there anything new or exciting that you as a company are working on that you can share with us?
DF: For the last year or so, the labs across the street from my office have been doing research and development for the next U.S. Presidential Aircraft (Air Force One). I’m trying very hard to find a way to take a selfie in the future President’s seat once the plane enters flight test.

Do you see yourself at Boeing in the next five or 10 years? If so, in what role?
DF: I can definitely see myself at Boeing for a while. I really hope I’m not doing the same thing, though. As I mentioned earlier, there are so many opportunities at Boeing that I feel like I’d be doing myself a disservice not to explore more of the company. Dan Ficek and his friend skiing at one of the many ski resorts located within hours of the Seattle area.

What are some of your favorite parts of living in Seattle?
DF: The geography of Seattle is really some of the best in the world in my opinion.  The city is situated on lakes and the ocean so in the summer you can hop on a boat and go sailing or swimming. Seattle is also an easy couple hours drive away from a number of different ski resorts so you can wake up on a Saturday, drive out to the mountain and spend an entire day skiing, and still make it home in time for dinner.

I’ve also been a Mariners fan since I was a kid, and the area is a stark contrast to the Midwest, in that it’s surrounded by beautiful mountains and water and the temperature rarely dips below 40 degrees.

It’s been close to 10 years since you left Fargo. When you make it back for a visit, what do you notice about how the city has changed?
DF: I notice a few things that have started to change. Downtown seems to be thriving, and, since my parents moved to the south side of town, I notice all of the new development going on down there. That being said, one of the things I love most about the city—especially coming back from a city infamous for the “Seattle Freeze”—is how warm and welcoming all of the people always are. I think it’s because everyone endures such harsh winters together, and somehow they bond through that experience. And now that I’ve been gone for so long, I miss the Midwest accent and always appreciate hearing it when I come back.

Do you see yourself ever moving back to and working in the Midwest?
DF: At this point, it’s hard for me to say. I’m really enjoying where I’m at right now so I don’t have any plans to move back at the moment. That being said, life is full of surprises, and I won’t count out the chance that I ever move back. 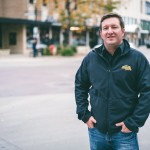